Yoga and Veterans: A Different Kind of Warrior 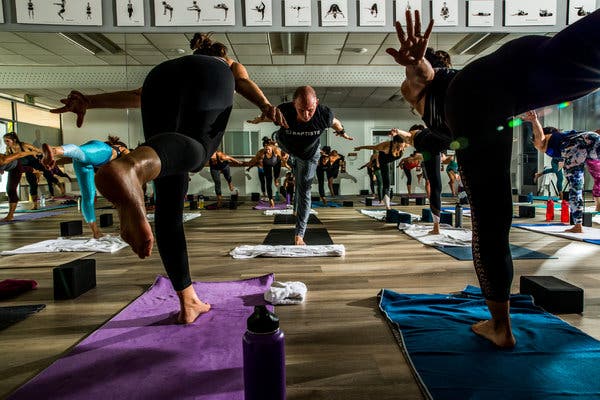 Many members of the military now include yoga — often taught by veterans — as an element of their workout routine, and veterans turn to the practice for therapeutic applications.

To casual observers of either military service or the practice of yoga, the path from Oorah to Om may not seem obvious. But the intersection of yogi and veteran is natural if unexpected, beginning with the five classic yoga poses known as warriors.

While veterans make up a small percentage of yoga instructors, their ranks are growing. Many members of the military now often include yoga — sometimes taught by veterans — as an element of their workout routine, and veterans turn to the practice for therapeutic applications. The Department of Veterans Affairs has successfully used yoga to help treat opioid addiction and post-traumatic stress.

“A lot of vets have post-traumatic stress,” said Thierry Chiapello, who served in the Marines and now teaches yoga at the National Defense University in Washington. “By lengthening the exhalation of breath, this gets people out of those fight-or-flight instincts that drain you,” he continued, putting them in a mode of “rest and recovery that definitely is associated with less aggressive behaviors.”

Veterans, long schooled in discipline and concentration, also make excellent yoga teachers, both to other veterans, whose experiences they understand, and to active-duty military members, whose trust they often gain. They are becoming a welcome addition in civilian yoga studios, where students are usually attracted to their compassionate yet frequently no-nonsense approach.

Here are some veterans who have become yoga teachers — from various service branches, eras and parts of the country — reflecting on the transition. 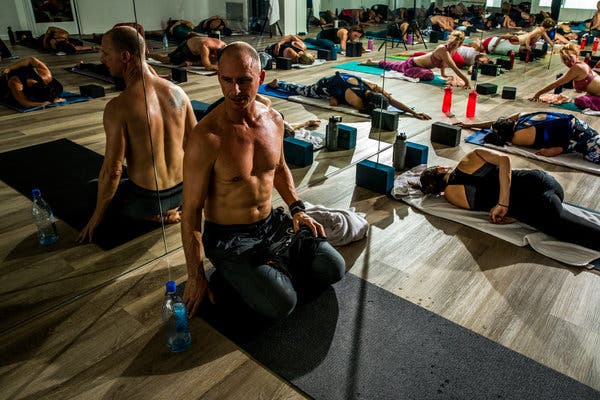 “There are huge synergies with the military and yoga,” said Mr. Allaire, who discovered this as he learned yoga. “There is a stereotype that yogis are a bunch of hippie types of people who are not militaristic,” he said. “But the whole system of yoga is about moral and ethical restraints on behavior and trying to stay calm in challenging conditions. Sometimes in a pose you feel pain and you have to say, ‘Is that pain that is damaging or is that discomfort that I need to lean into?’” 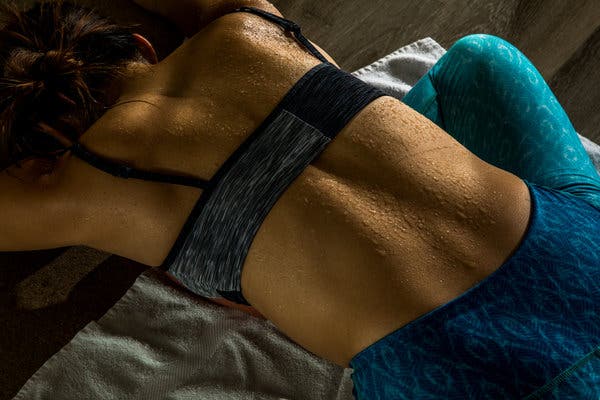 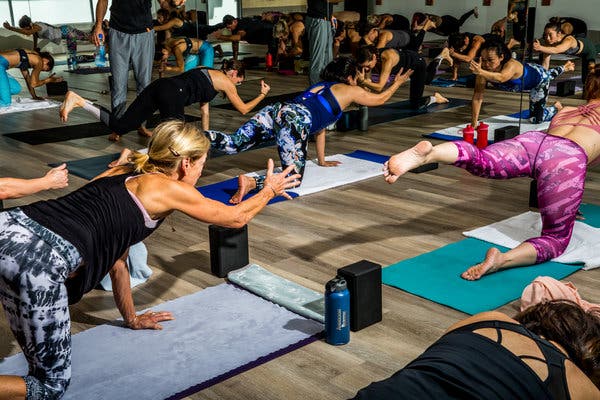 Mr. Allaire teaches hot yoga, a power-driven practice that is popular with veterans because of its athletic nature, and his background shows in how he teaches. “Your commanding officer is your breath,” he said during a recent class in Huntington Beach.

“I don't do a lot of chanting,” he said, acknowledging his special style. “I step into class and say, ‘O.K., folks, get into child’s pose.’ I believe this to be a discipline. Coming in late is not cool and not being serious about your practice is not cool.” 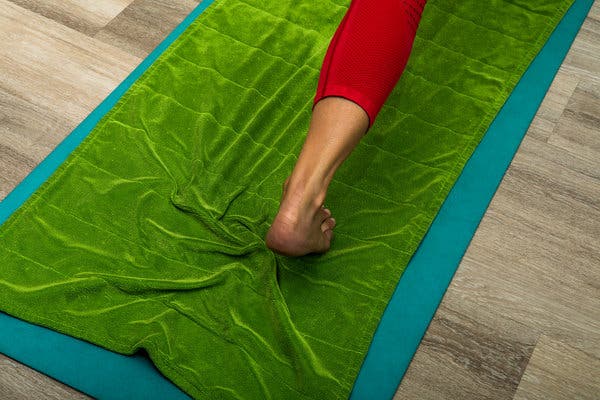 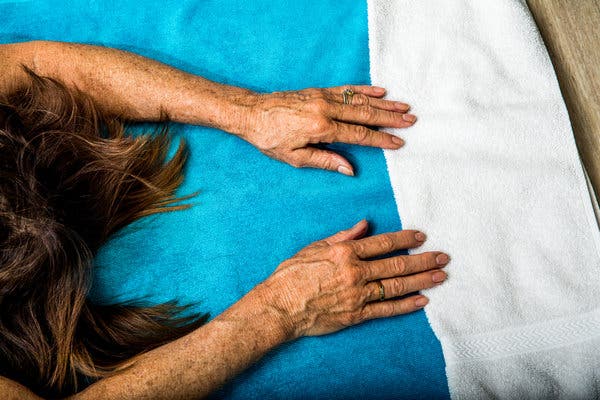 He noted that yoga could benefit people on active duty. “In order to be skilled at a firearm, you have to be able to control your breathing,” he said. “Special Forces people train in breathing techniques all the time. That is one little thing that no one would ever connect.”

Mr. Allaire experiences the service-driven life of yoga through his work for the Veterans Yoga Project, which provides yoga to roughly 1,000 veterans and their families per week as well as trains prospective teachers. “We will have four or five people in a conference room at a V.A.,” he said. “There might be an Iraq war vet in his 20s, a Korean War vet in his 80s, some can barely move, some may be missing limbs and the teacher’s job is to create space for a person to do a twist. Maybe all they can do is raise their hands above their heads, but we are creating a ritual.” 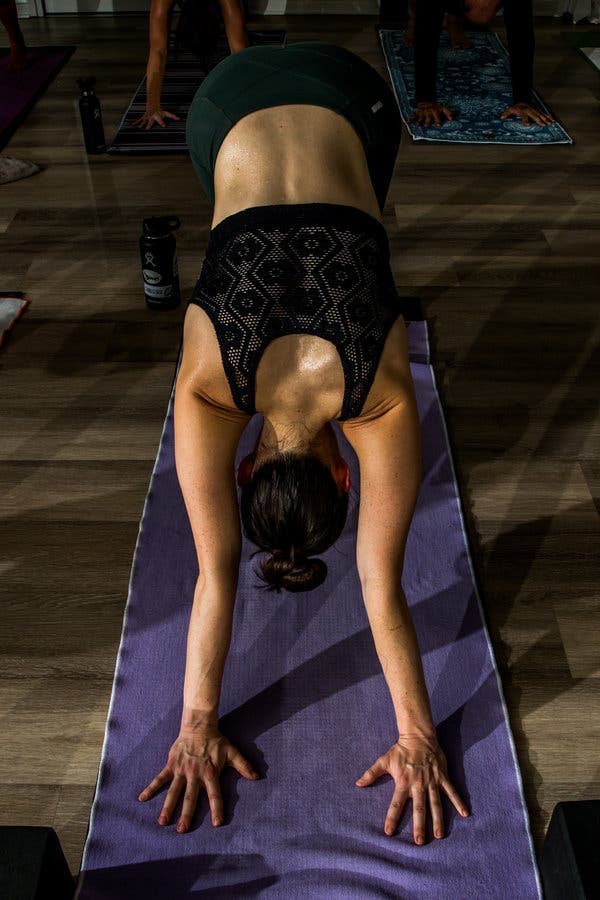 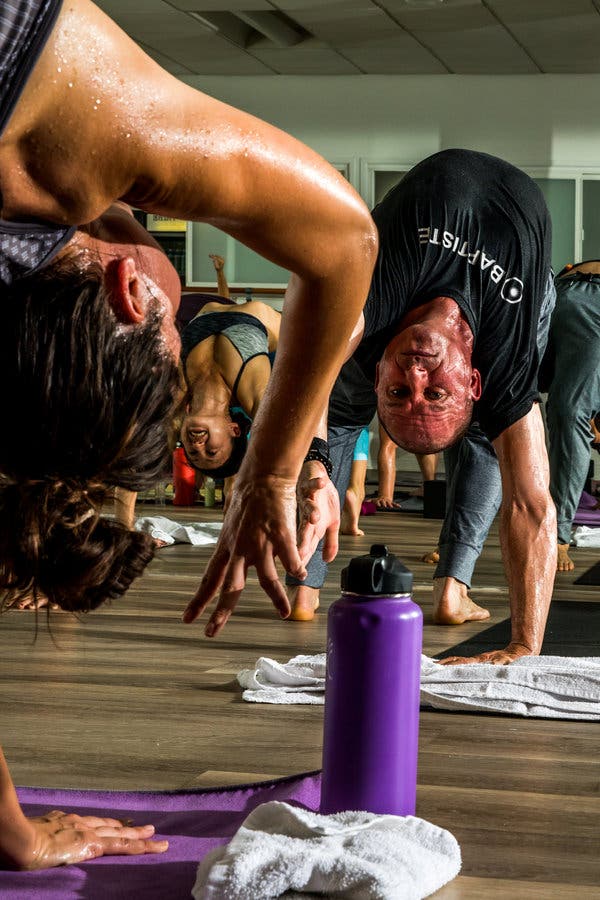 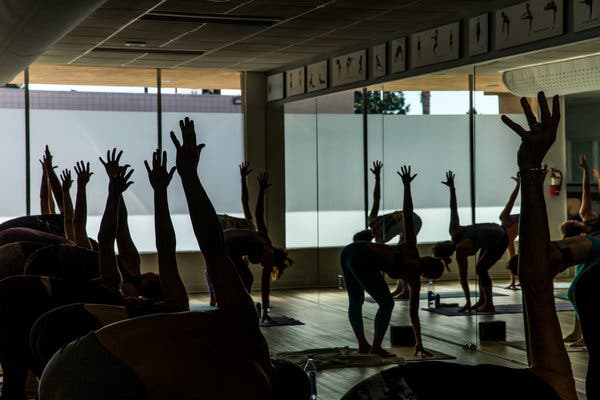 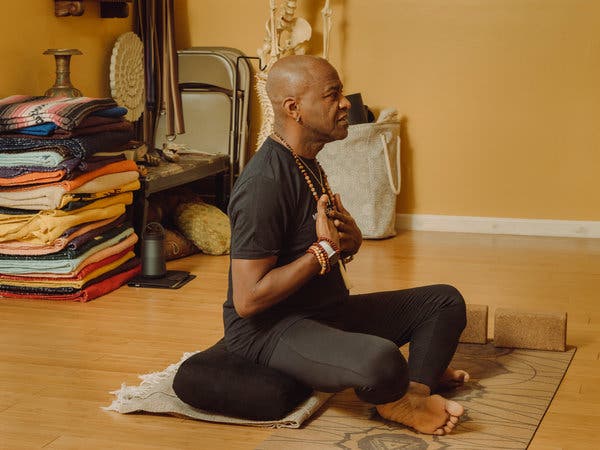 “I teach veteran culture to civilian yoga teachers, which is important,” Mr. Riley said. “With the V.A. accepting yoga as one of the methods for traumatic brain injuries or PTSD, there are more traditional yoga teachers coming in contact with veterans who may not understand the culture, and there can be some triggering. If I was to describe the average veteran, they are so stuck in their body that they are not really breathing. We teach them to breathe more deeply in their body.” 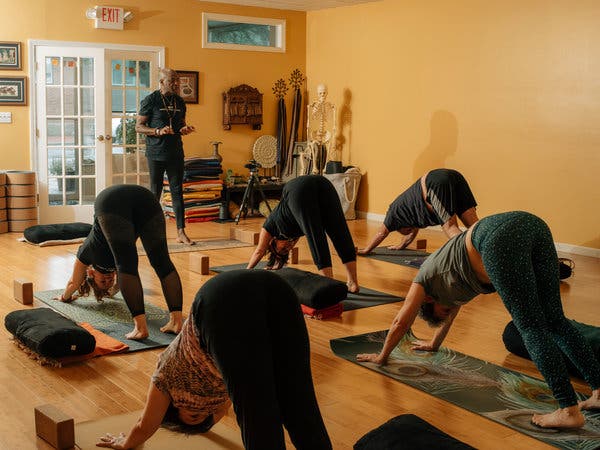 Mr. Riley notes that teaching veterans with post-traumatic stress disorder requires precautions. “For instance, I teach with my back to the door,” he said. “By allowing veterans to see the door, it gives them a little more ease in their body.”

He added: “As I move, I try not to move too much. I don’t do a lot of hands-on adjustments. There is a space with vets that I don’t violate. I don’t get too close sometimes, I allow them to feel what is coming up and sometimes it doesn’t feel good and that’s O.K. It is difficult, but you have to sit with it if you really want to heal. You want to just hold space and be able to recognize what is coming up in the moment and see what is my next move. ” 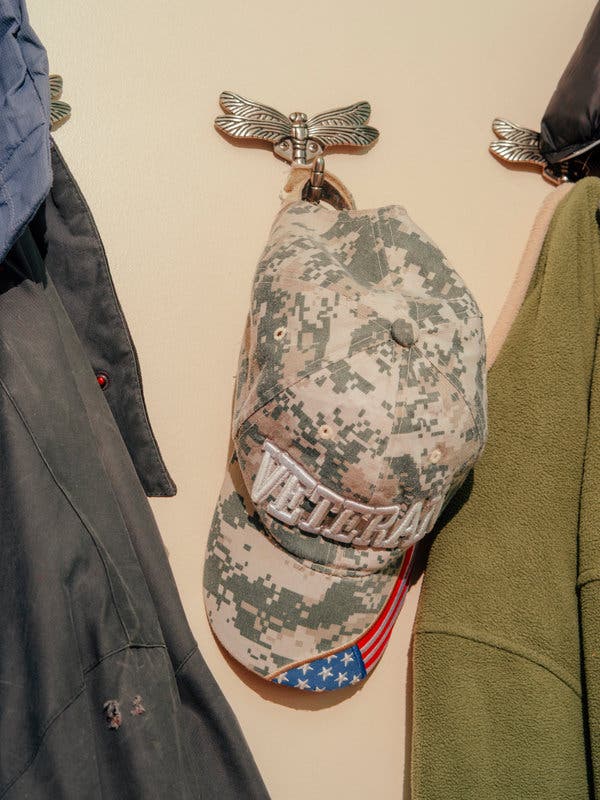 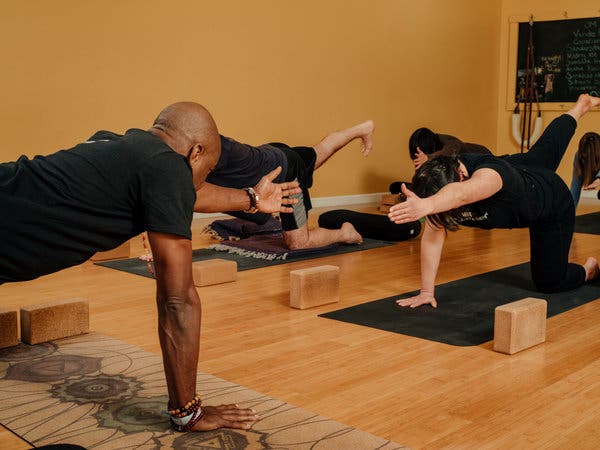 Like many veteran yogis, he practiced what he now preaches. “What I bring when I teach veterans is not just my yoga journey, but how I have been able to weave in other support techniques,” he said. “I have been done great with it. I know it works. Since 2012 when I went to the V.A. and started practicing yoga, my relationship with my children has improved tremendously. But, he noted, “It hasn’t helped much with my relationships with my exes." 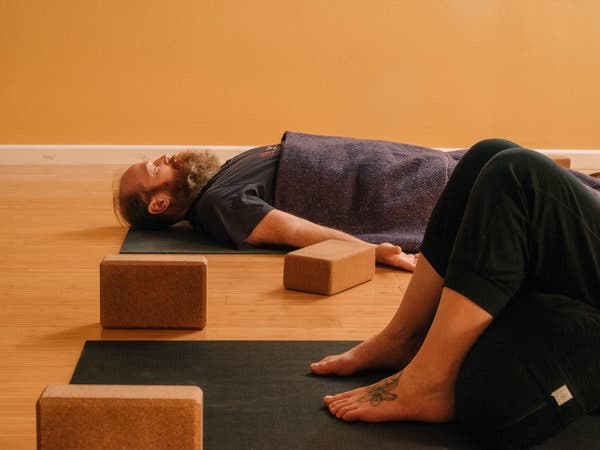 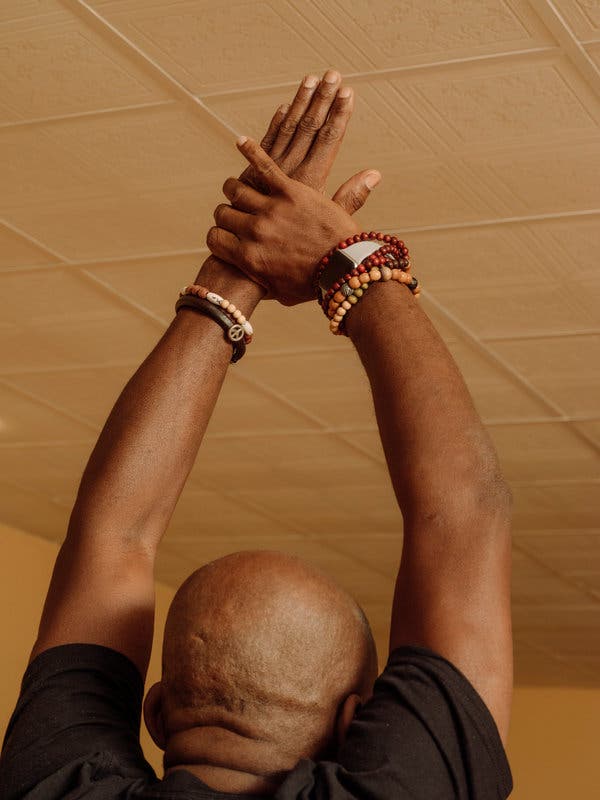 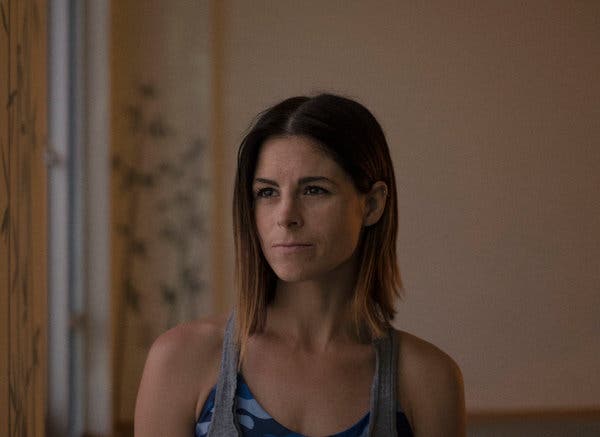 “I found yoga in flight school in Meridian, Miss.” Ms. Corwin said. “There was one yoga studio. This is when I found it was such an escape for me because flight school is so intense and they are critiquing everything you do. Nobody knew who I was and nobody cared who I was. I disappeared.” 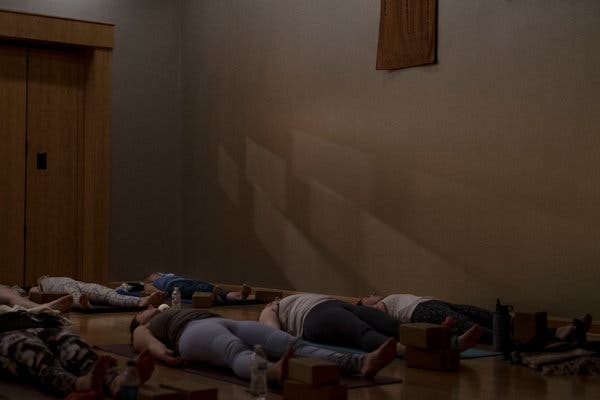 So what is the difference between teaching yoga to civilians and to active-military members and veterans?

“In the studio I am a bit more esoteric,” she said. “I use a bit more flowy words.” But being a veteran, she added, “absolutely adds a legitimacy in a competitive, stressful, critical world. They say, ‘If she can learn to turn her brain off from all the spinning I can, too.’” 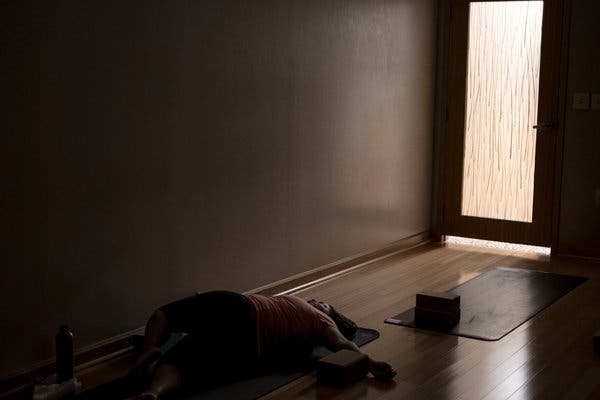 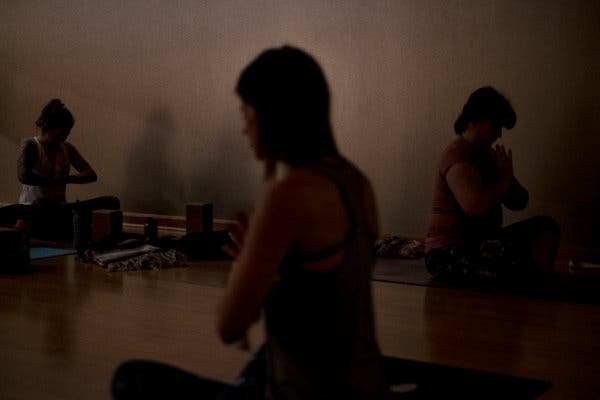 Ms. Corwin’s work taps into the military-civilian divide in the United States.

“The hard thing about teaching in the military — there is very much either you’re in the military or you’re a civilian,” she said. “It is really hard as a yoga teacher who hasn’t been in the military to step into that community and immediately garner the trust. When I teach the military, I teach a pretty power-focused class. I tend to hold poses longer and talk more specifically. They tend to like the direction — there is a sense of safety in the authority that they are used to. But I introduce a playfulness; I curse. I keep it real.” 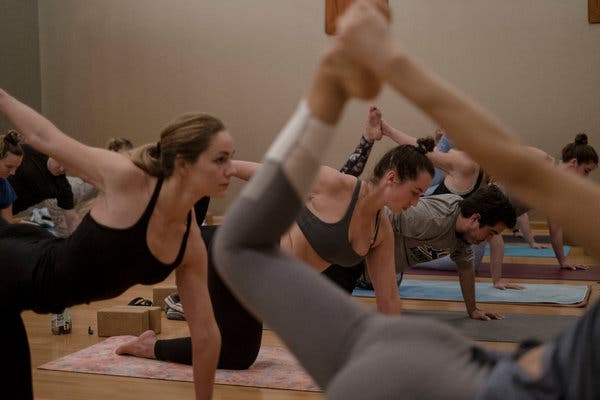 Sometimes people are skeptical at first, especially about yoga’s ability to offer the intensity that military workouts entail. “You invite some humor in and give them something to find their edge with,” Ms. Corwin said. “Within that community, I can use that different voice. With a bunch of PTSD vets, you wouldn’t take them to those places. My entire intention is how do I get them to walk back into a yoga studio.”

Not everyone can get past the perception of yoga, of course. One guy simply had to call it “combat stretch.” 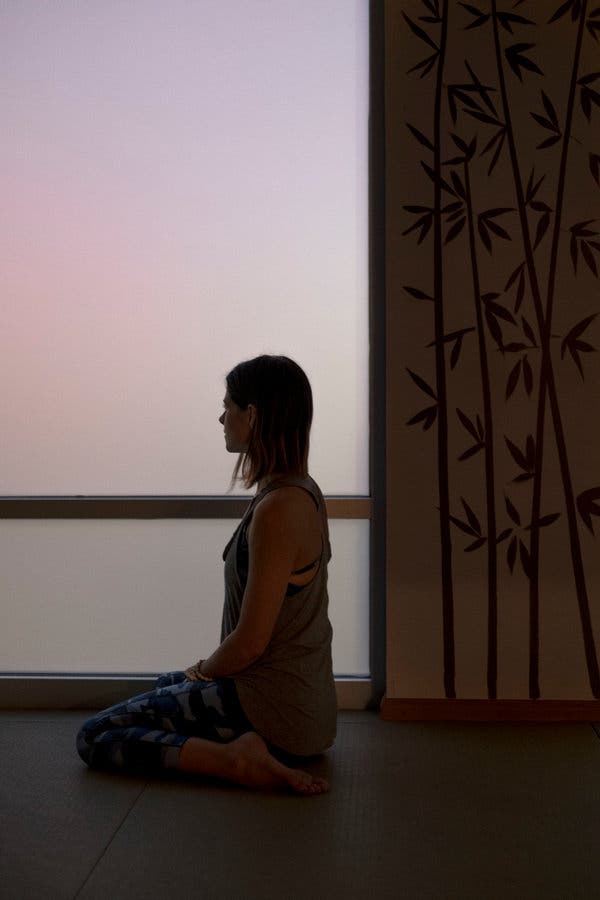 Former Army combat medic; teacher at Some Like It Hot Yoga and Fitness 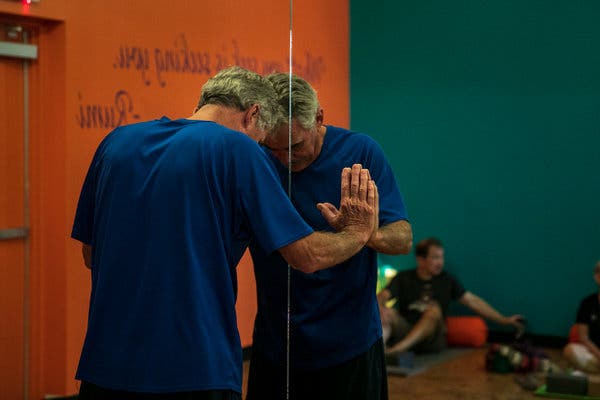 A veteran himself, Mr. Johnson recognizes patterns with yogis, especially men, that he tries to address. “What veterans try to do is pull themselves through the practice. It’s the opposite of what you should be doing. I try to really focus on the breathing what would happen if you just let gravity take over,” he explained “My passion is getting men into yoga and trying to get them connected to themselves, the pain they are feeling and the things they need to let go. It is incredible to see people learn that it is not about getting into the pose,” Mr. Johnson said. “Soldiers are very good at being in the moment, much better than I have seen with a lot of civilian yogis. But what I am learning is that it doesn’t matter if you are a former military vet who served four terms in Iraq or a housewife with four kids and anxiety issues. We approach those issues the same way. You think you have all this control in yoga, but it’s not about the control, it’s about kind of letting go.” 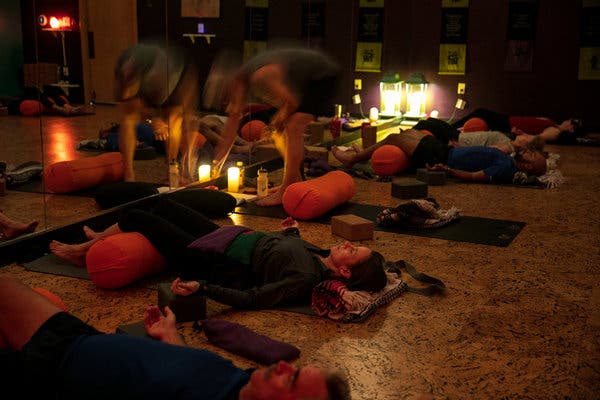 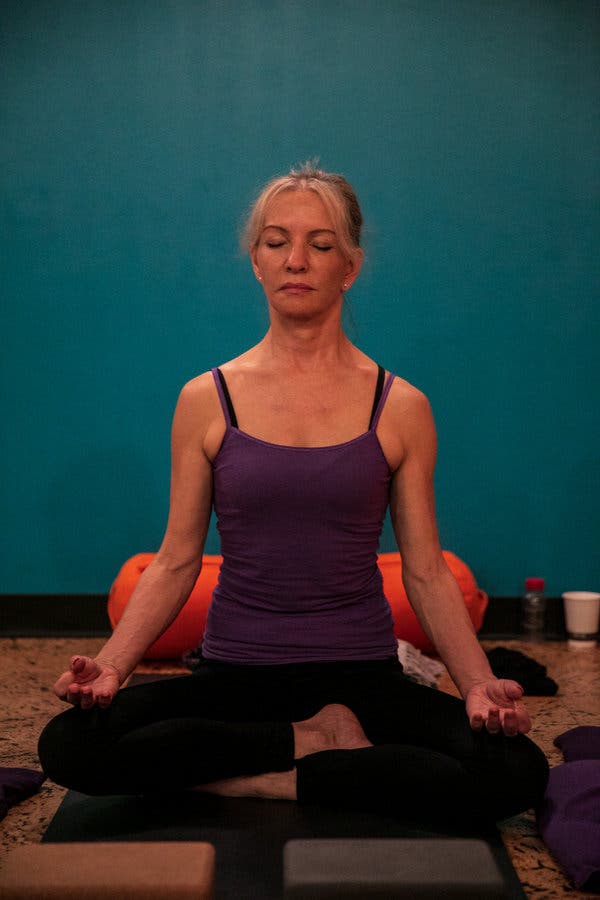 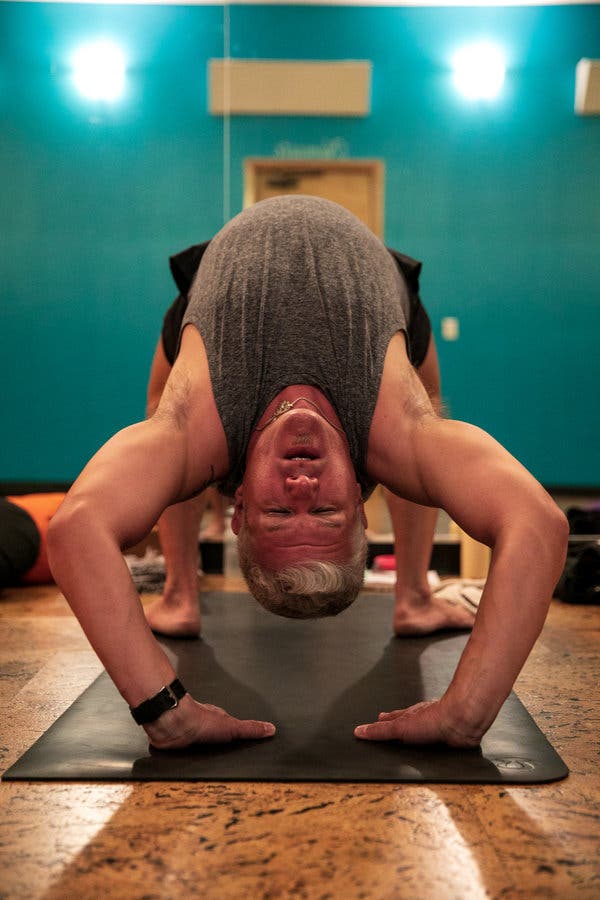 The studio attracts veterans, and sometimes it holds special classes, “Warriors in Poses,” focused on them. “It is a class for veterans taught by a veteran but opened to the entire community,” Mr. Johnson said. “I have been told that it is interesting to see a veteran teaching and I think they do appreciate it. I do bring a different point of view to my practice because we had to endure so much regimentation and structure that now I like to break rules.” 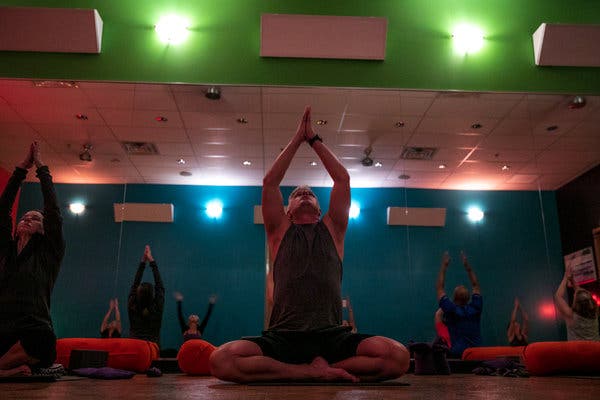 My 1st Student from 18 years ago